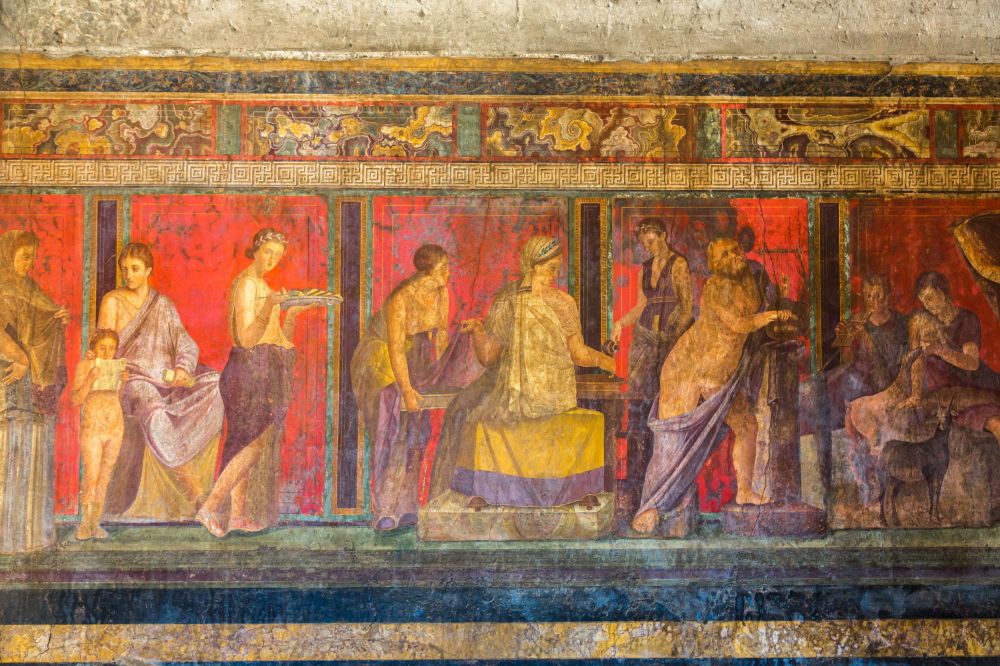 A new discovery in Libya has shown that the ancient ruins in the world still have far more unearthed secrets. In the ancient Greco-Roman city of Ptolemais, between the Libyan cities of Benghazi (Libya’s second largest) and al-Bayda along the northern Mediterranean shore, a Roman villa was discovered and yielded an impressive array of treasure. Literal treasure. You do have to wonder how we keep finding entire houses, especially in known historical site but hey, we all put stuff in odd spots. In case you’re wondering, no, they are not excavating in a warzone because the frontline is in the northwest, not the northeast.

The findings included 553 coins (bronze and silver), a room for manufacturing terracotta lamps, mosaics, frescoes and statues. The most prominent example was a mosaic of Dionysus and Ariadne, central figures in Greek mythology. Jerzy Zelazoski, an archaeologist from Warsaw University working on the archaeological mission, said that the coins were found in the room where the lamps were made. Due to the number of coins this could easily indicate that it was an important house for a merchant. The town was important at different times throughout its thousand year history as a Greek and Roman town but could never quite claim the legacy of a major Roman city. Now let’s shift to a different villa in France.

A large Gallo-Roman (something Roman from France) domus (fancy mansion) discovered in 2016 in Langrolay-sur-Rance, Brittany, France has been shown to be a bit more complicated than standard housing. Built near the ancient Roman city of Augusta Auscorum, the discoveries from it are quite shocking. It was older than originally estimated; the original structure was from the 1st century AD and was developed through the 3rd century AD when it was enhanced into a domus. It also contained a sophisticated heating system and layers of mosaics based on geometric, naturalistic and symbolist themes. Unfortunately, a local law requires them to turn the ruins over to its original owner who had first discovered. They have until September to finish their work. The work is being carried out by Inrap (Institut national de recherches archéologiques préventives – French National Institute for Preventive Archaeological Research), an institute dedicated to preventive archaeology, created by the government of France to safeguard their cultural history. In Britain we have a smaller discovery.

A cache of 25 Roman letters were discovered at the Vindolanda fort, an old Roman fort just south of Hadrian’s Wall (built along the northern most point of the empire to keep out barbarians). They’re called “letters” but in reality they’re actually very thin slices of wood with letters printed on them. They largely talk about events in their area but the rest have to be translated still. If you’re unfamiliar with the area it’s sort of the flashpoint for these discoveries. So far, with the exception of these new entries, there have been 752 tablets found, translated and available for viewing. They range in scope from a birthday invitation to a request for more beer to even underwear. The Vindolanda Trust, which runs the site, will no doubt be happy with their newest addition. It has been an essential tool in understanding the Romans further and be assured that any future tablets will generate additional excitement in our never ending quest to understand one of the largest empires on Earth. Why not look at a pretty picture next?

A Roman mosaic was discovered near Akaki, a village in rural Cyprus. The scene depicts a chariot race and dates to the 4th century AD. It is a rarity since horse races are not very common mosaics among the ones found so far. The measurement was disputed between these articles but suffice it to say it’s the size of a large floor. It probably had to belong to someone wealthy since they were not cheap to manufacture. The quality of the mosaic is also beyond impressive. It depicts a large scene of multiple men driving different chariots side by side with inscriptions. Fryni Hadjichristofi, an archaeologist from the Cyprus Antiquities Department, is leading the excavation. How did the Roman Empire achieve its architectural might? Glad you asked!

Mosaic 2 Check this one out, it has the best pictures.

The secret to the strength of Roman concrete has been found and by this point spread across the internet. What could it be? What is the mystery? Adamantium? Diamonds and platinum covered titanium over tungsten? No to everything. It’s just water. However, this is not a historical finding. It is a scientific one. A geologist, Marie Jackson, examined the concrete Romans used at the microscopic level and found that seawater flowing through the holes were causing the minerals to interlock, creating greater internal strength. Unfortunately the recipe to make this concrete has been lost but Jackson is working on reproducing the concrete to be studied in the future for practical uses. Let’s dig deeper now.

Digging under Rome’s metro, the remains of a burned out building were found with a dead dog inside. Finds inside included frescoes on the wall, a stool (or table leg they’re not sure), wooden railing and black and white floor tiles and bricks. The frescoes over the bricks date to the early 3rd century AD which will give the archaeologists a better idea of where to fit this house into Rome’s history, especially since it’s thought to belong to an aristocrat. Speaking of which….

A 5th century AD Roman sarcophagus was discovered in the center of London at a construction site near Borough Market. Unfortunately the tomb was opened when it was discovered which means that it had been raided and its contents stolen. All that is left is to test the remains of the corpse who is believed to have been a member of royalty due to the condition of the tomb. That’s it for now. Look forward to the next time we cover Roman history here at Tome of Trovius.

Support my site on Patreon for as little as $5, $3 or $1 per month. You contribute to the articles, you create the supply AND demand. For $12, $36 or $60 a YEAR you can play an active role in facilitating the creation of amazing personal content available to very few people:
https://www.patreon.com/tomeoftrovius

Pick freedom over censorship. Sign up today at Minds.com:
https://www.minds.com/register;referrer=TomeofTrovius

You can support me on Minds by signing up for a monthly subscription or reading my Blogs:
https://www.minds.com/TomeofTrovius

Check out my Steemit blog:
https://steemit.com/@tomeoftrovius