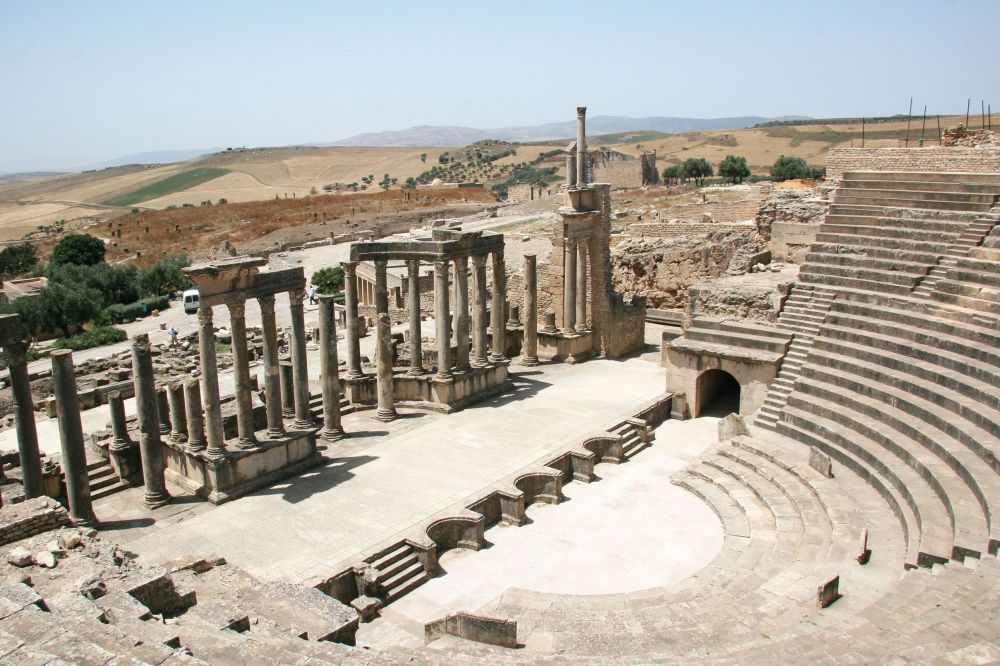 Roman Theatre in Dougga – the former capital of Numidia. Tunisia

Welcome to France! We’ll be starting our survey of information here. A preserved Roman neighborhood was discovered in Sainte Colombe, a small commune across from Vienne in southeastern France. The finds are already quite impressive. They include:

There were two fires during its heyday which ironically preserved its architecture. Benjamin Clément, an archaeologist with Archeodunum, is working on the area with 15 archaeologists and 5 interns. It may yet prove to be an excellent example of an entirely preserved Roman area, similarly to how we now have entire European cities preserved from the Middle Ages.

A Byzantine chapel’s remains from 1,600 years ago were discovered in Kilis, a border city with Syria. A mosaic was found as part of the chapel with inscriptions as well. Unfortunately this place was not part of any archaeological dig. They were discovered when security forces found illegal excavations going on and informed the government which took possession of the site. The mosaic had been destroyed partially but will be moved soon.

Pottery pieces labeled with ANT have been uncovered in Antiocheia Ad Cragum, an ancient Roman city in Antalya, the south of Turkey and a popular tourist area. The dig was overseen by Professor Michael Hoff (Nebraska University) who has been digging out the city for years.

A 2,000 year old necropolis in Uşak, near Afyonkarahisar in the west, featured dozens of rock cut tombs for the dead but lacking actual human remains. Local archaeologists believe that they are symbolic and meant to represent fallen soldiers.

A funerary epigraph was discovered in Porta Stabia (part of Pompeii) showing the life of the person, a city magistrate, along with a gladiatorial brawl in 59 CE that very well may have resulted in the person’s death.

Carthage was once the capital of a great country, the antagonist to Rome and an amazing civilization. An excavation near the city has unveiled a man buried in the bleachers of the Roman race track. Dr. Ralf Bockmannread, head of a team of German archaeological team, led the dig.

For more articles related to science & history go to Historic & Scientific Findings and check out my other pages for excellent content on science, technology, history and more!

The best way to support this website is to share it and this article across social media and with your friends.

I now have a MakerSupport as well. Feel free to subscribe to me there as well:

Here is a referral link so that you can start your very own account and begin supporting creators:

Support my site on Patreon for as little as $1 per month. You contribute to the articles, you create the supply AND demand. For only $12 a YEAR you can play an active role in facilitating the creation of amazing personal content available to very few people:

You can support me on Minds by signing up for a monthly subscription:

Pick freedom over censorship. Sign up today at Minds.com:

Check out my Steemit blog:

Join the Discord and join the discussion: